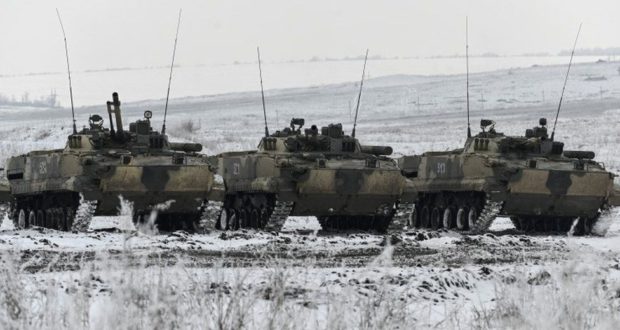 About the latest developments of the conflict in Ukraine:

The UKRAINE CENTRAL REPRESENTATION IN ARGENTINA reiterates and insists on its total repudiation of Putin’s invasion against the nation of Ukraine.

Despite the statements made by the secretary of the National Security and Defense Council of Ukraine, Oleksiy Danilov, at a press conference this Monday, January 24, at the end of an extraordinary meeting of the body, stating that: “Today there is no reason to panic and I would ask everyone to be calm”, reiterating that Kiev is “fully aware” of what is happening, and that the government “has control over events”, NATO has expressed various concerns due to the increase in military activity by Russia on the border.

Although the information in the different media is ambiguous and incomplete, the facts are clear and visible: Russia has intensified its border military activity since September 2021, as we can see in the following sequence of satellite images provided by the private company Maxar technologies:

It is important to note that foreign diplomatic personnel from Ukraine have begun to withdraw (at the moment members and relatives of the US, Australian, UK and German embassies have withdrawn from the country), suggesting fears of a possible further escalation in the conflict. When consulted, the Ministry of Foreign Affairs of Ukraine commented: “We express our gratitude to our international partners who seriously assess the current situation and do not resort to premature evacuation measures” (Information by Pavel Polityuk and Natalia Zinets. Edited in Spanish by Javier Leira). The European Union will not withdraw personnel from its embassy in Ukraine claiming “to have no specific reason (…)”, according to the EU High Representative for Foreign Affairs, Josep Borrell. At the same time he affirmed on Monday the 24th that: “nothing concrete will be approved today, because there is an ongoing process”, which pointed out that the foreign ministers will continue “preparing a powerful package of sanctions” against Russia.

Important declarations during this week:

President Biden said this week that Russia could invade next month and German Intelligence says Russia is prepared to attack but has not yet decided to do so. Russia denies it is planning an attack. The Russian Foreign Minister Sergei Lavrov said: “If it depends on Russia, there will be no war, but we will not let them undermine and ignore russian interests. I cannot say for sure if negotiations are over now, as you know, the US and NATO have been studying our simple proposals for more than a month and only the day before yesterday we have received answers in western style that are a bit confusing but rational in minor issues. This is better than nothing, but the main thing for us is to deal with the basic concepts of european security”.

On the other hand, NATO Secretary General, Jens Stoltenberg, said that the allies are watching very closely as russia moved soldiers and weapons to Belarus: “We are also ready to step up as we actually now do. Our military presence in the east and part of the alliance to prevent any missunderstanding or room for miscalculation about NATOs ability and readiness to protect and defend all our allies.

Adding to this, there was a telephone call between Putin and Macron and in short, the russian president said: “The fundamental concerns of Russia are to prevent NATOs expansion because this is about the security of Russia, they view NATO as an aggressive force”.             When asked about the possibility of Russia to invade Ukraine, the Swedish Minister of Defence Peter Hultqvist responded: “It is difficult to say what will happen but there is direct threat to Ukraine and also direct threat to the european security order and I think it is importante to be very clear to the russians that they are responsible for the crisis, they are the reason why we have this situation. They are the ones who already broke international laws and have done it before, so, the responsability of this situation is on the russian side, totally”. Asked about the Russian president’s statement about seeing NATO as a threat, he replied: “There is no threat from NATO or any of the democratic european countries against Russia, there have never been any threat. This is some sort of russian narrative that are fake news and a falsification to create tension, so there is no threat from NATO, no treath from Europe. We should not be naive about Russia, they want to keep stepping forward here with their unrealistic list of different sort of demands on Europe and all these demands are unnacceptable and I am positive that there are some sort of discussions between NATO, USA and Russia, but we cannot compromise the questions that are fundamental for each nation sovereignty and integrity”.